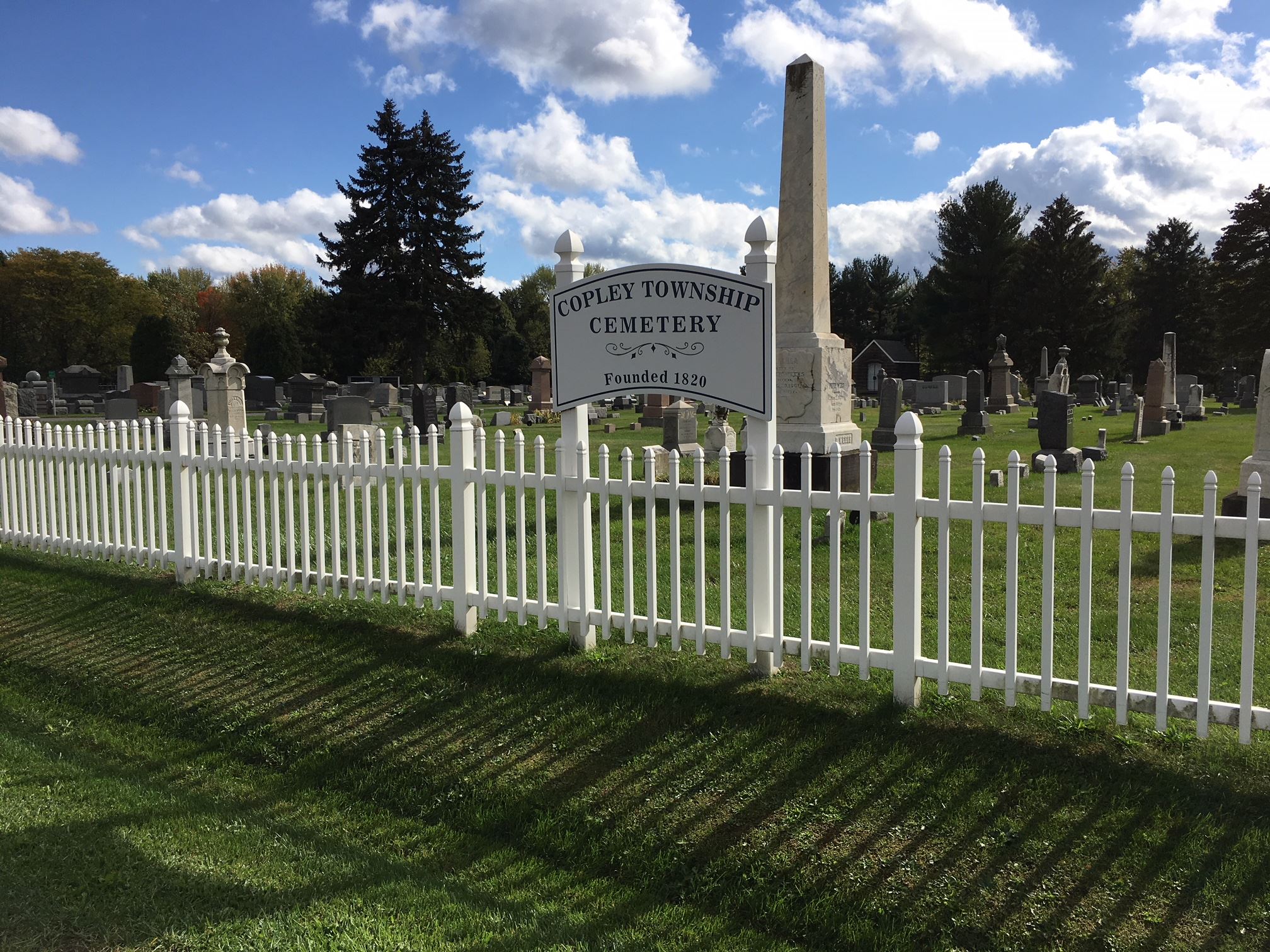 Although used as a burial ground since the early 1820’s the Copley Township Cemetery was not acquired by the township until August 16, 1854. Joseph Starr sold slightly less than one acre of land “then used as a burying ground” to the Trustees for the consideration of $5.00 and then “erecting and keeping a perpetual fence around the plot and keeping the same in repair.” Less than two years later an additional acre was obtained for the much larger sum of $80.00.

Over the years more adjacent land has been acquired to bring it to its present size of 9.5 acres today. It consists of 9 sections, 56 blocks, 1842 burial lots that provided 6507 individual graves. There is also a private section with 98 graves, a Veterans Memorial Section with 369 graves, and a columbarium with 300 niches for a total of 7274 individual graves. It is the only active cemetery still performing burials in the township.

In 2012 the cemetery was closed to non-residents for new lot sales in order to conserve grave space for our long-time residents. Qualifying for new purchases is determined by the deceased being a current resident or a past resident that resided in the township for a minimum of 10 years. Proof of past residency is required.

In-ground gravesites and columbarium niches are sold on an as needed basis only and in numeric order by section and lot number depending on need. 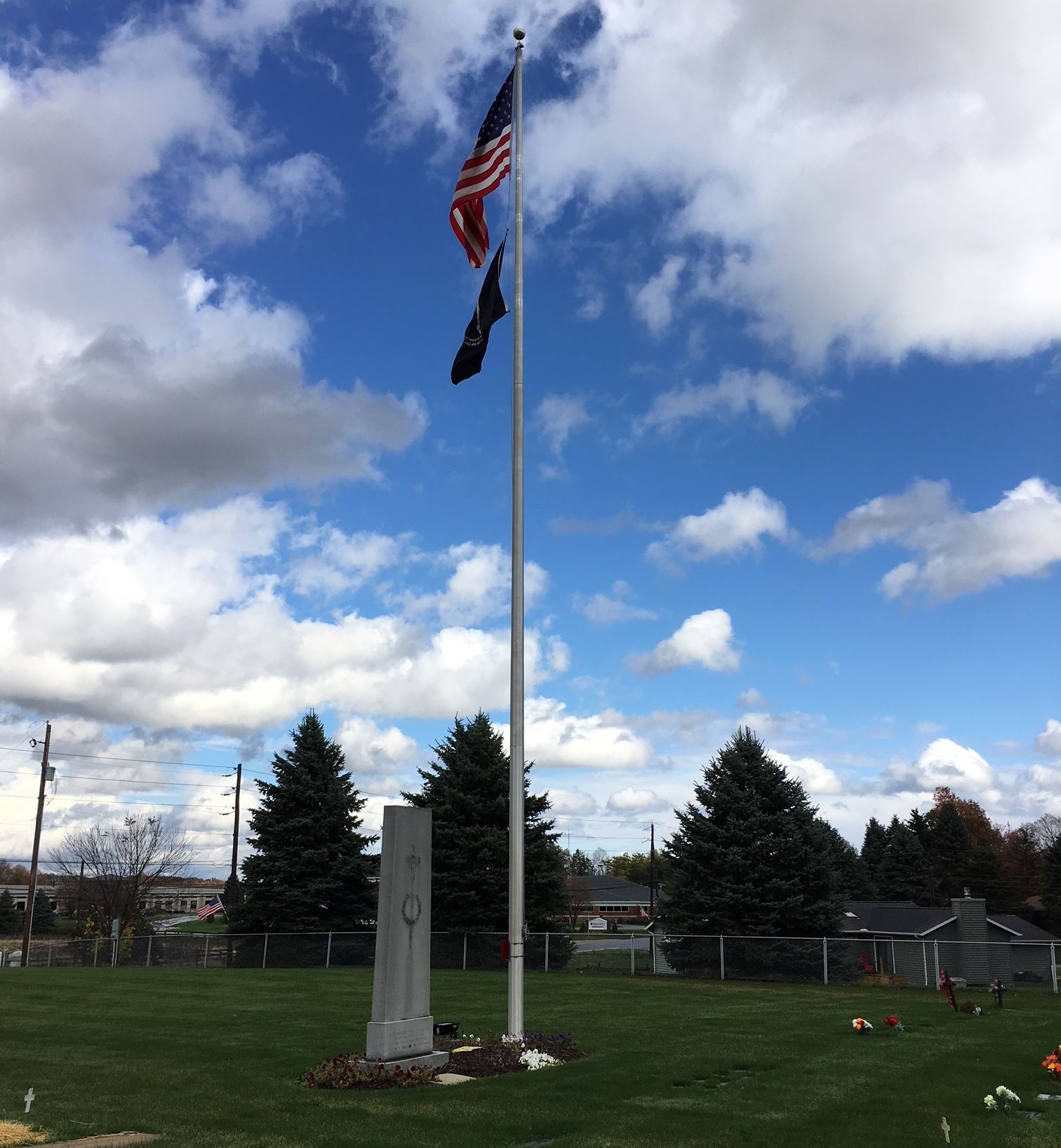 The Veteran’s Memorial Section was created in 1954 with the donation of land from J. Alden & Mary Lou Myers and Minor & Ruth Myers. Terms of the land conveyance included the establishment of the Veterans Memorial Section, a private burial section for the Myers family only, and an open area that is to be used for annual Memorial Day ceremonies. There is a 50’ flag pole re-dedicated on Veterans Day 2011, an Eternal Flame first lit in 1969, and a granite monument dedicated in 1956.

Gravesites are reserved for only honorably discharged Veterans and their spouses who reside in Copley Township. A minor or child or a disabled unmarried adult child of a Veteran may also be buried in the Veterans Memorial Section if they meet certain criteria.

All requests for burial in this section must be approved by the Veterans of Foreign Wars (VFW)/American Legion Graves Registration Officer. All Veterans have earned by their service a Veterans Administration (VA) Marker at no cost to the family. Only ground-flush bronze, granite, or marble markers are allowed. No upright markers.

Questions concerning Veteran burials or VA Markers should be directed to the Cemetery Sexton. Learn more about the Veterans Memorial Section rules at Burial Rules for Veterans (PDF). 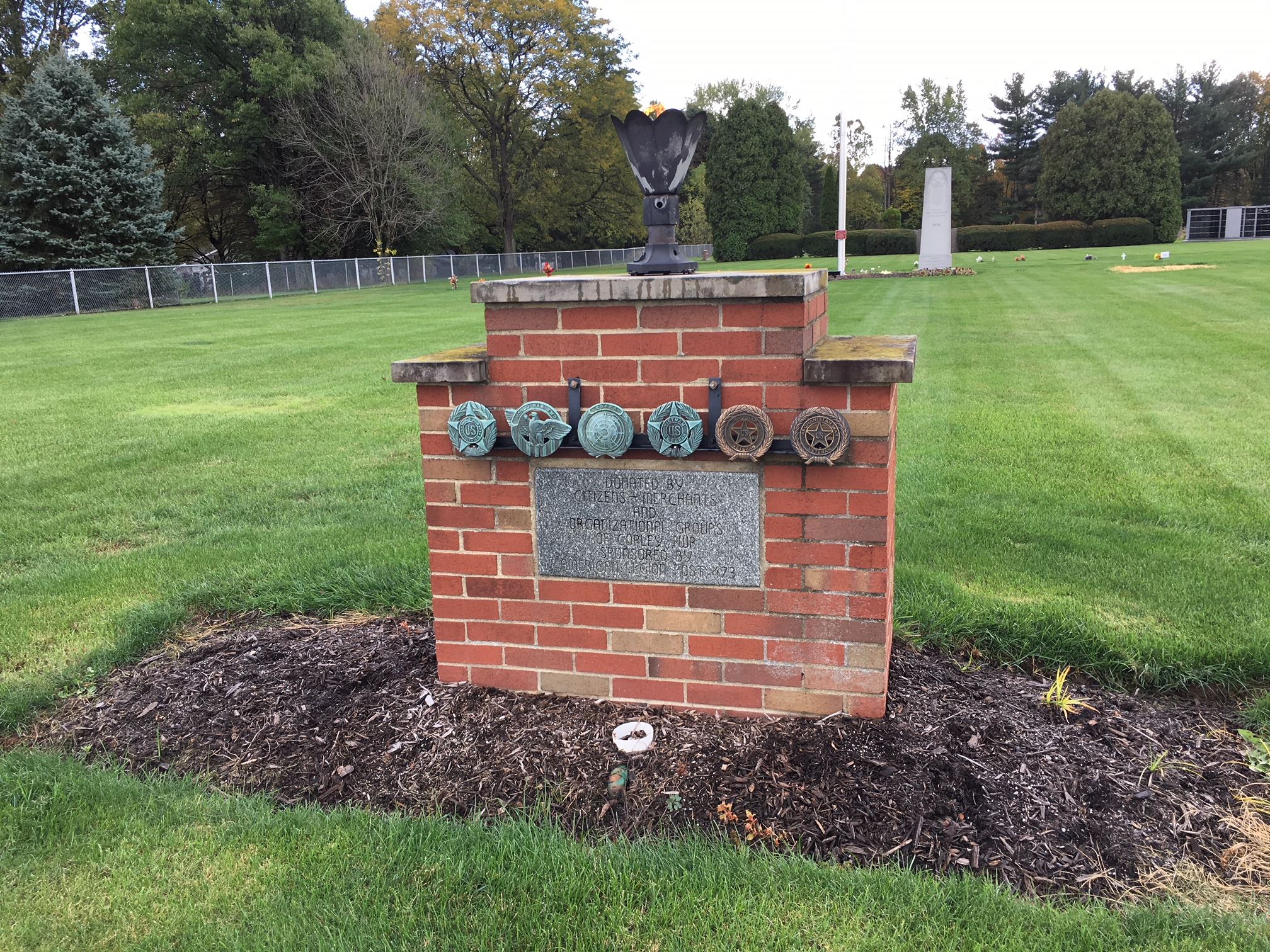 The Eternal Flame and Monument near the entrance of the cemetery was erected over 50 years ago and dedicated on Memorial Day 1969.  The inspiration to erect the monument was the eternal flame installed at Arlington National Cemetery following the assassination of President John F. Kennedy.  After the death of her husband, Mrs. Kennedy requested an eternal flame placed at the grave of her husband.  This request was inspired by the eternal flame at the Arc de Triomphe in Paris. Both she and the President were very moved by the significance of the monument and the flame, during a visit to France.

After the death of the President, several members of the Copley American Legion requested and received permission from the Township to erect a monument with an eternal flame to recognize the sacrifice and dedication of all service members, past, present, and future. It was through the dedication of such patriots as Louie Fundak, Wendell Hill, Jobie DiRocco, Bob Duncan, and others that the Copley Cemetery Eternal Flame came to be.

The pedestal was erected by members of #473 Legion Post with assistance from the Township. There are medallions on the front of the base honoring wars that the United States has been involved in...WWI, WWII, Korea, VietNam, Middle East--Iraq and Afghanistan.

The Eternal Flame was extinguished for several years during the gas shortage in the ’70s. Bottled propane was used for Memorial Day and other special events.

The Township has taken over maintenance and providing gas service so the Flame is now again...a full-time Memorial beacon that honors and commemorates our fallen veterans. 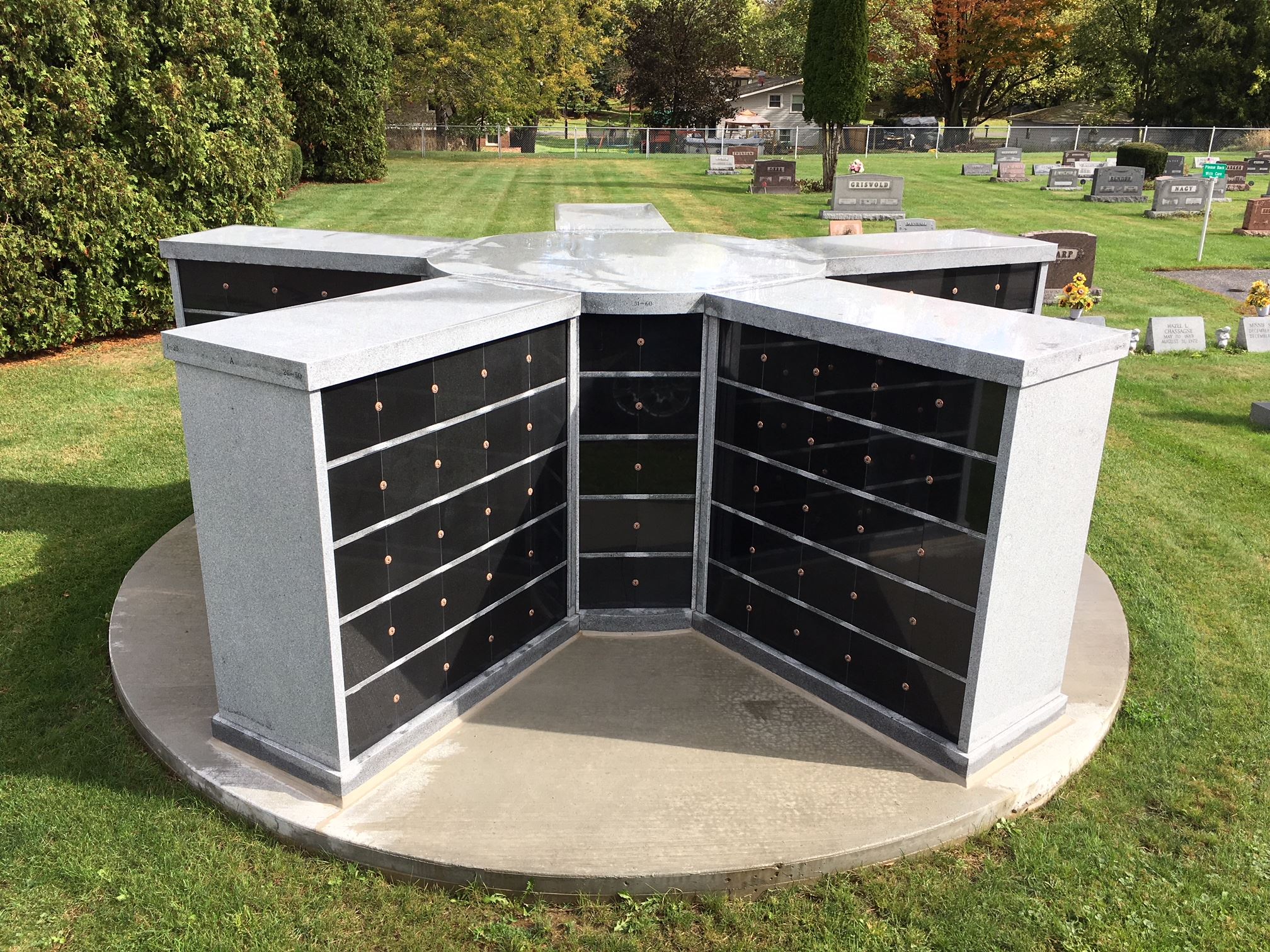 In 2017 a star-shaped columbarium with 300 niches was installed to offer an alternative to in-ground burials for cremation interments. The columbarium niches can hold two urns provided they both fit into the niche. A maximum of two niches may be purchased at the time of need. 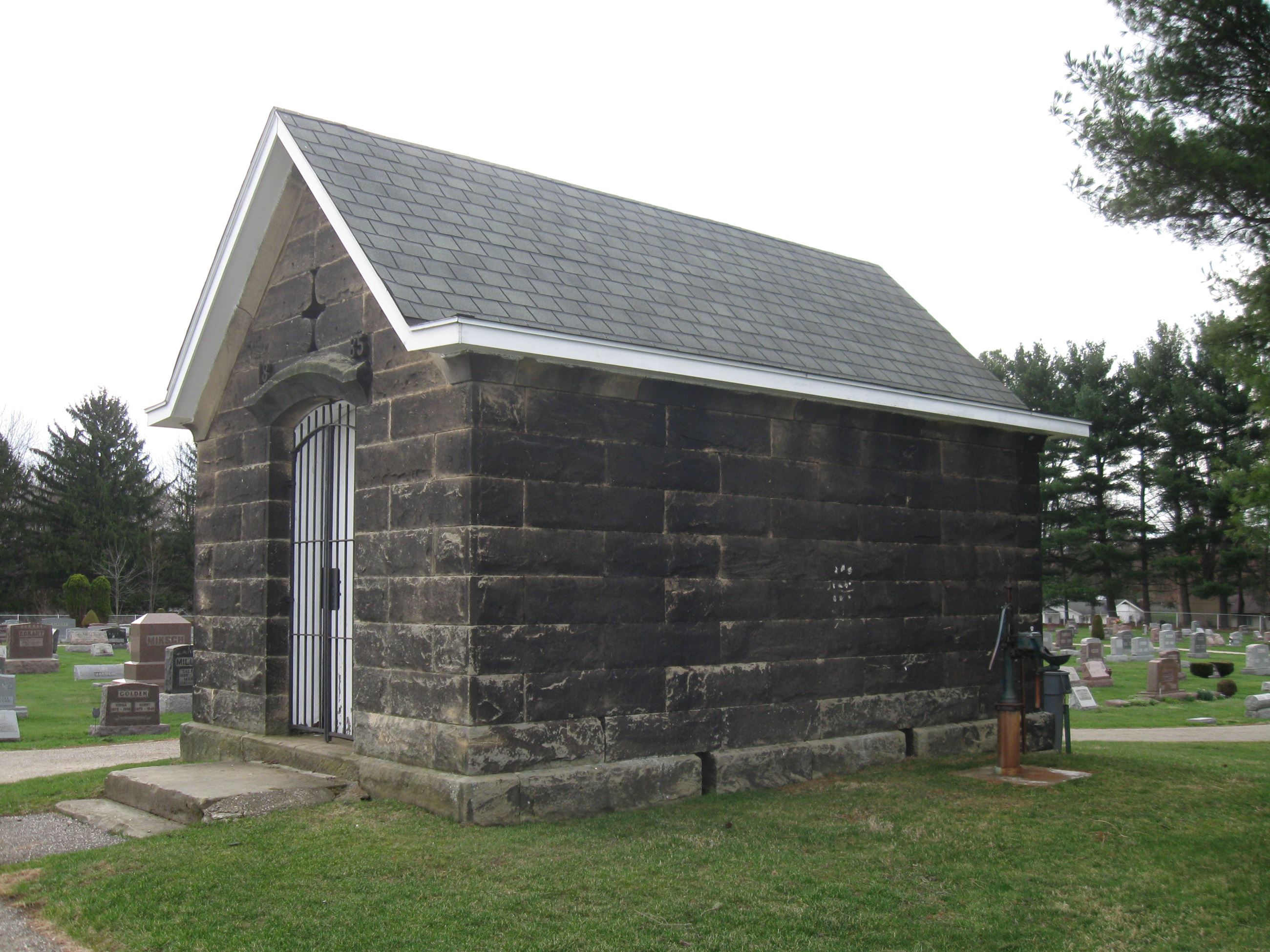 In the heart of the cemetery stands the Cemetery Receiving Vault built-in 1885. Receiving vaults were built for two reasons.

The second was to prevent grave robbing. Grave robbers would dig up the remains of recent burials and take them to early physicians who would use them for anatomical research and training.

The vaults prevented that practice and gave families and the community peace of mind because they were constructed of heavy stones and had lockable iron gates protecting the entrance. Since the vault was in operation for 45 years prior to modern digging equipment it is thought that a considerable number of deceased were stored inside its walls.

With the Montrose and Stimson Cemeteries in close proximity, it is possible that some of the deceased intended to be buried in one of those cemeteries might have been transported to and stored in this vault as well. 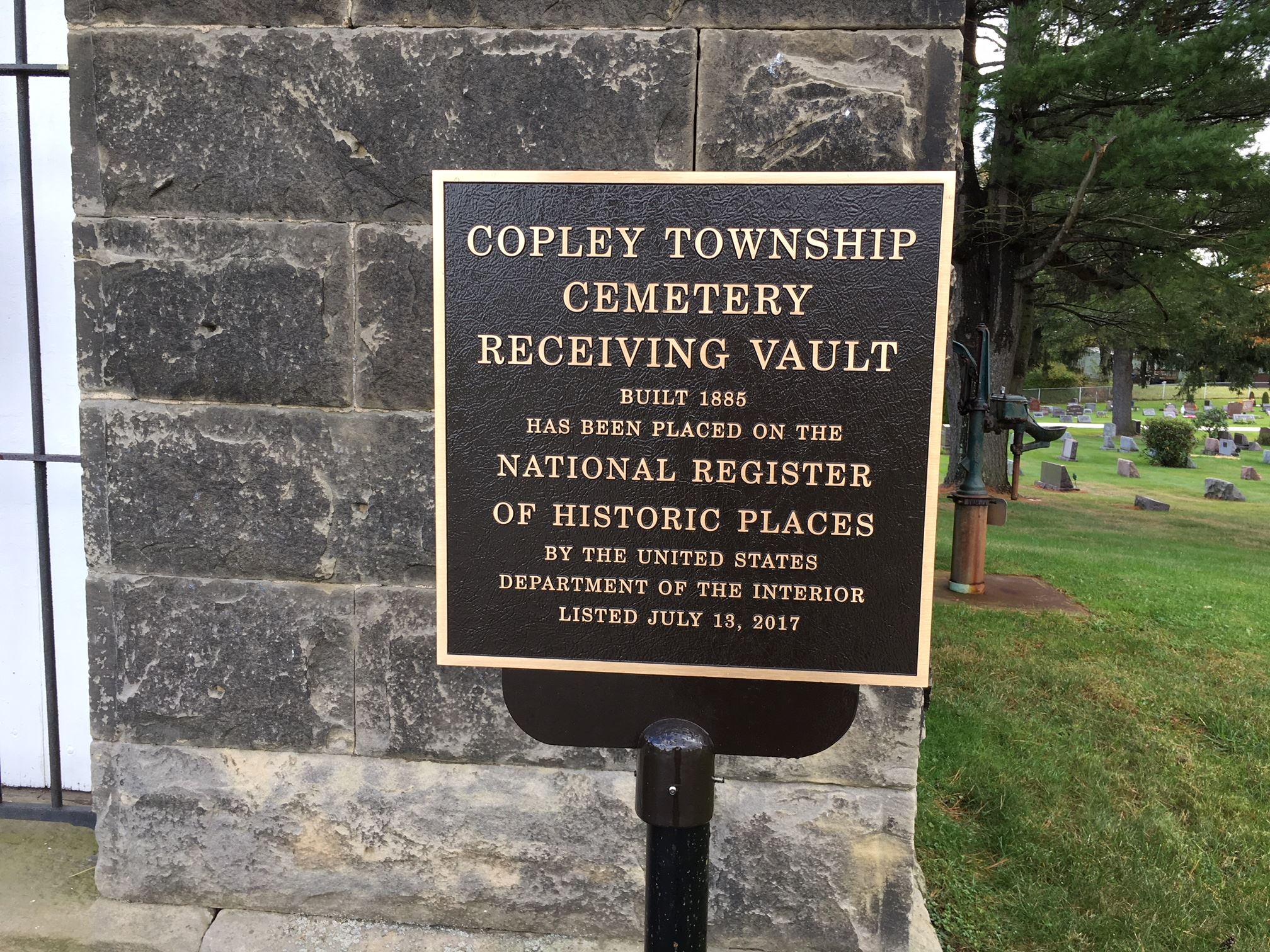 Because of its significance to the community and unique Late Victorian funerary architecture the vault was placed on the National Register of Historic Places in September 2017 by the United States Department of the Interior.

Buy Back, Transfer, or Private Sale of Graves or Columbarium Niche in Copley Township Cemetery

When an in-ground burial lot or two (2) columbarium niches are purchased there may come a time when a family finds they are not going to use all the individual graves or second niche and wish to part with them. There are three options they may choose:

Township Buy-Back: The Township will buy back the unused graves or vacant columbarium niche at the original price the family paid for them at the date of purchase.

Transfer of the Graves/Niche to a Third Party: The family may transfer the burial rights to another party. This is simply stating the original owner wishes to transfer, or give, their burial rights for the remaining graves to someone else.

Private Sale to a Third Party: The family may sell the burial rights outright to whomever they choose for whatever price they agree upon.

The Township requires verification that all rightful heirs upon to any lot or niche are aware of and in agreement with any transaction. 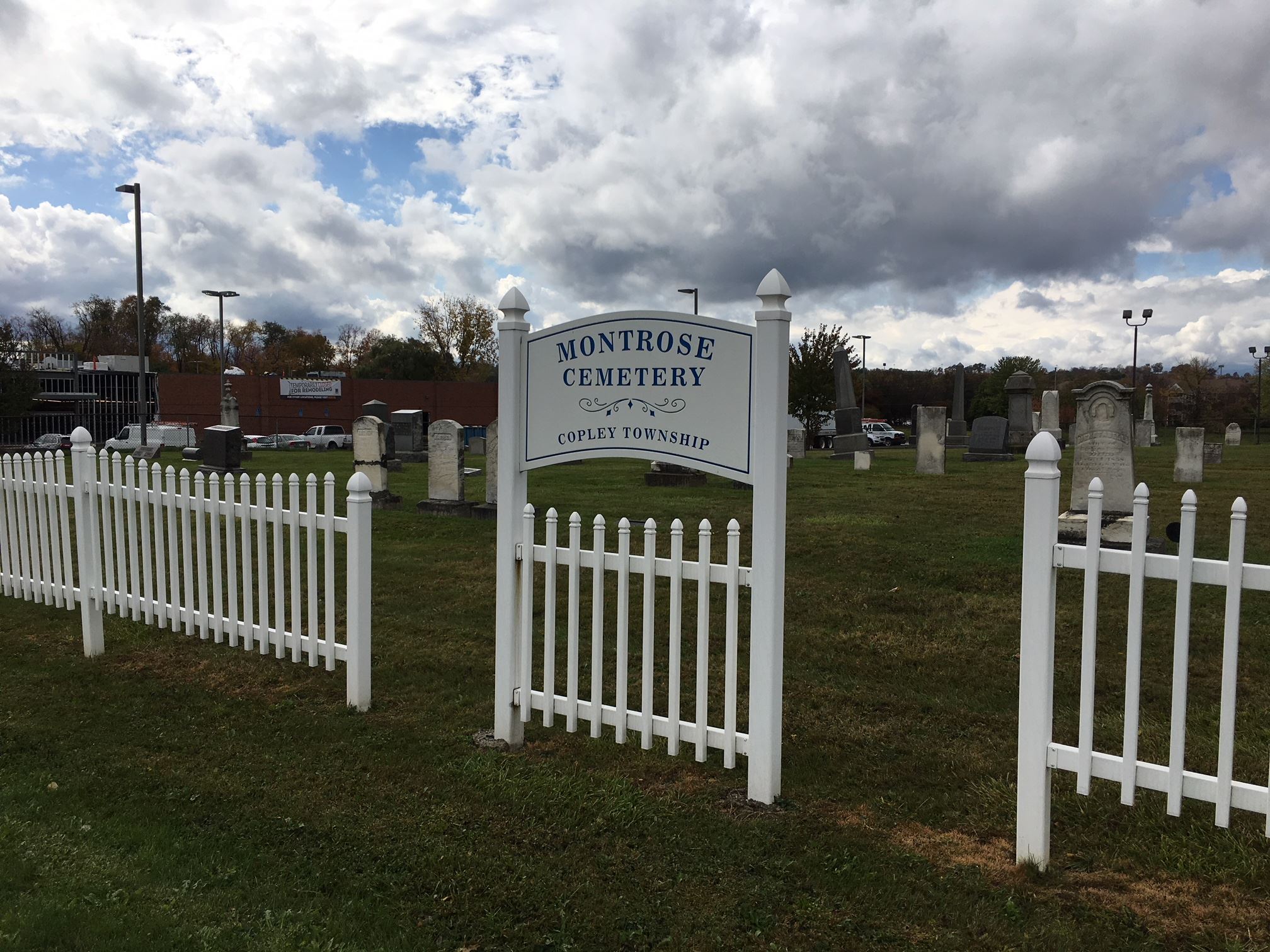 The Montrose Cemetery is a half-acre site and is located just south of Medina Road (State Route 18). The cemetery was established in the early 1800s on land owned by Gardiner Greene of Boston, a principal investor in the Western Reserve Tract that became Copley Township in 1819.

In 1832, Joseph Hawkins, Jr., son of a Revolutionary War and War of 1812 veteran, paid Greene three dollars an acre for ninety-five acres that included the land the pioneers had appropriated for the cemetery. When Hawkins, Jr. sold the property in 1844, he deeded the cemetery to "the Trustees of Bath and Copley Townships". Four years later he would bury his father there.

In February of 1997, a renovation of old tombstones and grave markers was completed and it was discovered that the oldest legible burial date was 1811 and the newest 1934.

There are many children and infants buried here along with at least twenty veterans, including three who served in the Revolutionary War, eight veterans of the War of 1812, and nine who fought in the Civil War. 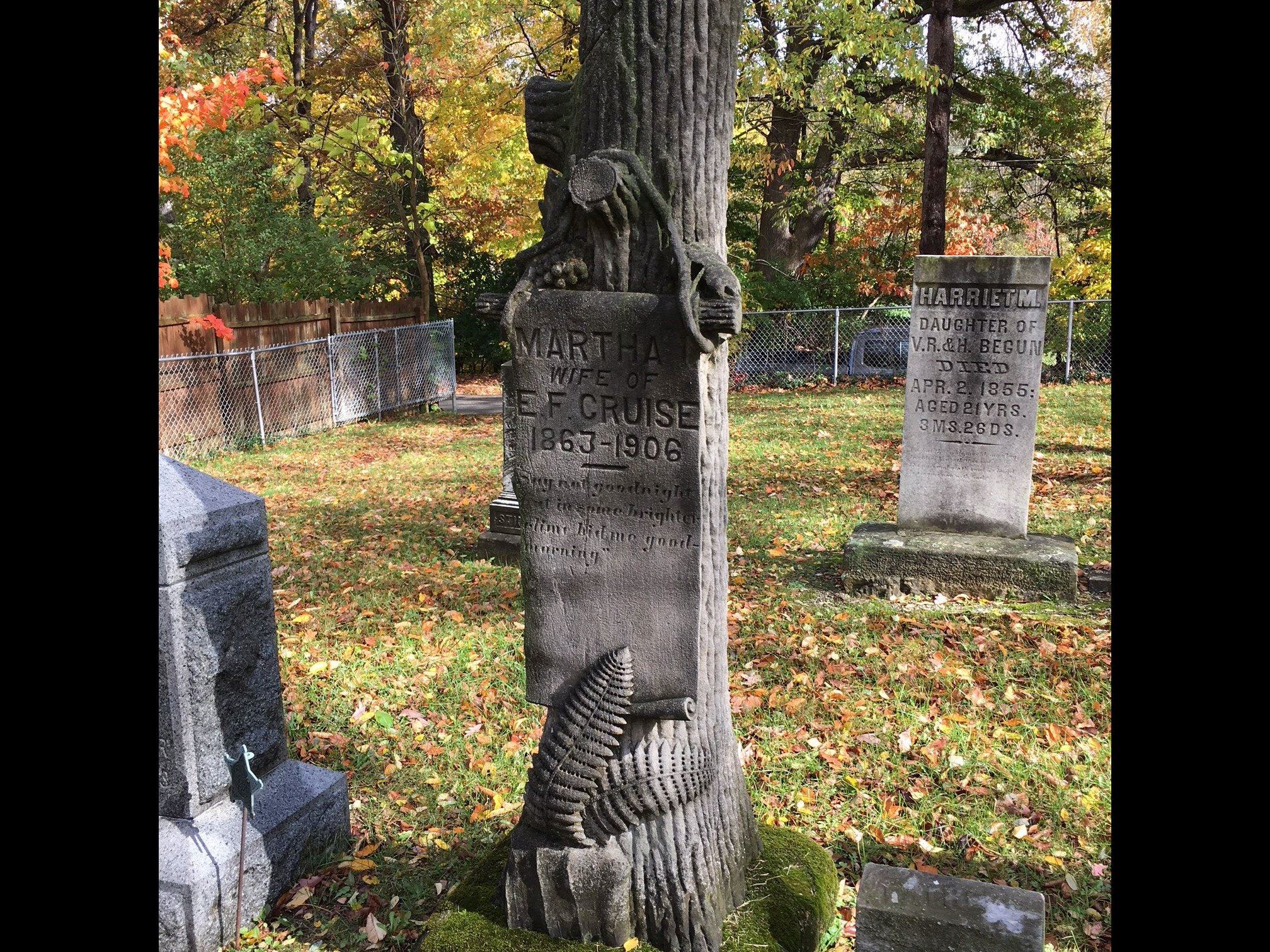 The property was transferred to Copley Township Trustees, Noah Robinson and Rudd Hopkins, and their successors in office forever, on April 3, 1841, for the sum of twenty-five dollars. The original deed is in the archives of the Copley Historical Society.

In January of 1991, a group of Boy Scouts from Troop 382 completed an Eagle Scout project that consisted of identification, documentation, and location of the gravesites. Their research discovered that the earliest legible date of burial was on June 19, 1839. The youngest aged burial was of a two-day-old "Infant" of Charles and Emiline Krum, who lost two more children, one aged four months and the other one year six months, also buried there. The oldest aged burial was of Elizabeth Oberholser, 89, born on June 28, 1839, and died on December 11, 1928. She was the last known burial to take place in this cemetery.

The Township takes great pride in these cemeteries because they provide a tangible link to our past. Some prominent residents of the past that helped found and shape the Township are buried there. Every effort is made to keep them in pristine condition.

For information regarding any of these cemeteries, please contact Copley Township Service Department at 330-666-0365 or by Email.